Göbeklitepe, which is not used as a settlement and serves only as a temple, entered the UNESCO World Heritage List in 2018 with its amazing monumental architecture. Year 2019 was announced as “2019 Göbeklitepe Year” in Turkey. Even though a small part of has been excavated, it still has changed the timeline of civilization with its history of about 12 thousand years. Considered as the oldest and largest ritual site of the world, proved the effect of religious belief on the transition to a settled life. 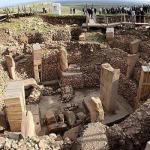 Although a limited portion of this prehistoric settlement was excavated in the Harran Plain, its unusual findings have changed some previous findings on the Neolithic Age. The excavations at Gobeklitepe near Orencik village of Sanlıurfa city were started and carried out by the German archaeologist Prof. Dr. Klaus Schmidt and it lasted 20 years until his death in 2014.

Göbeklitepe has contributed a great deal to our understanding of hunter-gatherer life, animal husbandry, agriculture and livestock migration, sacred architecture and the birth of art. It was abandoned after it continued to be present around 8000 B.C and it was not used for other or similar purposes.

The Oldest Religious Site In The World

The most interesting findings at here the t-shaped monolithic pillars which can reach 6 meters in length and 40 tons in weight. Even though six of these pillars were excavated, geomagnetic measurements found there are round 20 pillars in total. These mysterious pillars were lined in a circular plan with stone walls in between. The pillars make up a round or oval enclosed space surrounding a pair of big pillars in the center of the structure.

Most of the pillars have human, animal or abstract symbols. In addition to these oldest reliefs carved into the stone, three-dimensional animal reliefs are also found. The pillars with hand, arm and finger motifs on its body is interpreted as human statues. From the welcome area the excavation site is reached in one minute by shuttles. The animation and information in the entrance are the kind that can’t be missed. The excavation area, which is divided into A, B, C and D, is surrounded by a walking excursion route and its top is closed.

Make sure you visit Sanlıurfa Archaeological Museum because the artifacts and sculptures excavated in Gobeklitepe are exhibited here. Leopard, wild boars, stork, fox, gazelle, scorpion, snake and headless human reliefs in temple structures are important findings of the belief of the period. In addition, an impressive replica of Gobeklitepe is waiting for visitors in a separate section.